What Does It Feel Like to be an Old Man? 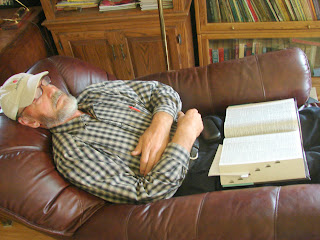 A few weeks ago I quietly joined the ranks of that segment of our population identified by a variety of monikers—senior citizens, the elderly, old folks, geezers, etc by passing my 60th birthday. I remember when my dad had his 60th birthday roughly 30 years ago. One evening as I was milking the cows I answered the phone to find one of my aunts on the other end. Expecting my dad to answer, she yelled brusquely into the phone, “How does it feel to be an old man?” My dad had a gravelly voice which I could have easily faked and I have always regretted not playing along with her a little and having some fun.

Sometimes I like to reflect back on my life journey. When I entered first grade at the age of six I began to think of myself as a “big boy”. Seven years later I became a “teenager” and that coincided closely with entering high school. I missed the next common rite of passage of most teenagers—“getting their beer license”, as I didn’t start drinking at the age of 18. I didn’t have my first date until past 20 and somehow never thought of that as a significant marker of transition in my life as some of my peers were already married and having children. I did become aware, however, that somewhere in the distant future I would hit the age of 30 and become a hopelessly old fogy. I married at 28 and of course I saw that as a very major life changing event. The same also goes for my becoming a father two years later. I had just passed 30 then and no, I did not yet feel like an old fogy. The next ten years flew by ever so quickly and there I was looking at the big “four oh”, the boundary line in life (or perhaps the top of the mountain) where one crosses over from youth into middle age! From then on, the sages say, “It is all downhill!”

It did indeed feel like my life started going downhill as I entered the 40s seeking physical therapy treatment for chronic back problems and, a few years later, I began a gradual descent into a vaguely defined environmental illness which expressed itself in a manner similar to chronic fatigue syndrome. Fortunately, as one grows older and his physical capacities begin to wane, another force, the accumulation of hard won wisdom, is kicking in and that helps to level out the descent. By that time I had learned that I was strong enough to injure myself, that it really is a good idea to eat healthy foods and to protect oneself while working in dirty or toxic surroundings, and that it makes a lot of sense to work smarter instead of harder. By applying some of these principles, I eventually found the downward slope becoming more gradual and less slippery and at times even ascending a little once again.

It has now been 20 years since I crossed life’s summit and mathematically speaking that works out to half of the time it took for me to get to the top. That means I should be half way down by now! Something inside me yearns for the hope that I will get to stay high up on the mountain to work and to enjoy the view for a good while longer and that the best way down will be to drop off a cliff when the time is right.

So back to the question that was popped to my dad 30 years ago and was mine to field at a time when I perceived myself very much a youth, “What does it feel like to be an old man?” Well, I could begin by mentioning the various kinds of “itis” that seem to constantly pop up somewhere in my body all of the time or to hang around like mosquitoes or deer flies on a muggy day. It’s kind of like farting. Some people seem to get a certain pleasure out of yammering about their aches and pains just like they do--well you get the idea! But it is best not to do it any more than you have to because most people would rather not hear it anyway.

Posted by Marlin Burkholder at 4:47 PM

Email ThisBlogThis!Share to TwitterShare to FacebookShare to Pinterest
Labels: Humor, My Occasional Rants