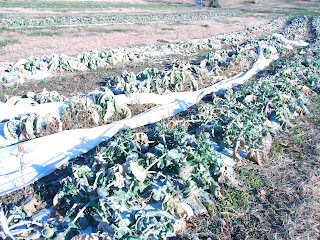 We had a hard time this fall growing cauliflower.

It’s not unusual for a disappointing crop to have its beginning when something goes wrong with getting the crop started. Oftentimes there is something wrong with the seed like low germination if the seed is too old or perhaps disease organisms in the seed that causes it to germinate poorly or to become sickly after it comes up. If the seed does come up properly there are many ways to screw up if it was started in a greenhouse like many of my crops are started. Sometimes I have inadvertently gotten something out of whack with the way I had mixed or selected my seed starting medium resulting in disease or chemical imbalance in the medium. Assuming that I have gotten everything right up to that point, the next common way to fail is to lose control of temperature, light, or air flow fluctuations inside the greenhouse. All it takes is one night of letting the greenhouse get too cold in the early spring or one day of letting it get too hot or dry in early summer to lose or to seriously set back the growth of a bunch of tender but otherwise healthy seedlings. If the temperatures are kept in the proper range it then becomes important to know when to set up fans inside the greenhouse to simulate the action of wind or to move the plants outside for a few hours per day in order to expose them to natural wind and temperature fluctuations, a system otherwise known as cold hardening, usually done in the last week or two prior to transplanting into the field. Most greenhouse started plants need to transplanted by six weeks after their germination in the greenhouse. If field preparation or other work scheduling delays result in greenhouse plants sitting in the greenhouse much beyond six weeks, the plants can become root bound and will not start off well once they are transplanted.

Compared to last year’s more successful cauliflower crop which had gotten off to a much slower start in the greenhouse and even more pestilence after transplanting than this year’s crop, I should have seen cauliflower doing at least as good as last year. I had done a better job with the plants keeping them growing on in the greenhouse and had even set up curtains of protective cover and window screen to keep out the yellow and white butterflies that often lay eggs of the imported cabbage worm on the plants while still in the greenhouse. I transplanted mostly healthy well started cauliflower on schedule in late July and early August. Except for a marauding groundhog that repeatedly raided one end of the patch, most of the plants took off vigorously following transplanting. I had to dust them a few times to keep off the cabbage worms but the harlequin bugs were not nearly as bad as they were last year and everything pointed to a good harvest beginning in early October.

October came in and steadily went by with no evidence of heading up in my otherwise healthy looking cauliflower crop. We finished up the CSA season on October 20 and still there were few cauliflower heads big enough to harvest. I waited and waited and waited. November came in and finally I was able to cut a few small to medium sized heads for sale at the farmers market. Then it started getting cold—unusually cold for this part of the country in November! I watched helplessly as we got several nights in a row with temperatures in the low 20s and teens. I tried pulling frost protecting row cover over some of the rows but this effort proved futile as we were getting a lot of wind and without a good way of holding down the cover over two foot tall rows, much of it ended up in the road and on the neighbor’s fence. Broccoli can handle freezing temperatures down to 20 degrees without serious damage but cauliflower is in real trouble if the temperature gets below 30. The killing frosts that began around Oct 20th had pretty much stopped the cauliflower from growing any further and now the November freezes had turned the whole unfinished crop ashen white and weeping on the ground.

I pretty much gave up hope with the beleaguered cauliflower and began threshing out the heads of grain amaranth I had cut and spread out to dry in the greenhouse in mid October. By now the colorful heads had dried nicely and a few hours of rubbing them over wooden frames covered with hardware screen separated the grain and chafe from the coarse stems. The next step was to rub the grain and chafe over window screen. The grains and fine chafe goes through the screen and the coarse chafe and any remaining stem pieces come off the top. Following this I winnowed the mixture by pouring it slowly in front of a box fan set at medium speed. A large stainless steel dish pan set directly beneath where I was pouring caught most of the grain as the wind from the fan blew the chafe onto a tarp spread out on the ground behind the pan. I had to repeat this process several more times with the caught grain before I got most of the chafe out of it. Two 150 foot rows of amaranth yielded about three quarts of straw colored grain. I scooped up the chafe and put it in feed sacks. This chafe is wonderful for sopping up oil spills in the shop and spreading on ice in the winter.

I finished up going to the farmers’ market on the last Saturday before Thanksgiving. This year would be different though. The farmers’ market board decided to hold holiday markets on the three Saturdays before Christmas. I decided that it would be cool to make some “alegria” to sell at one or two of those holiday markets. Well it turned out to be way too cool to go to the first holiday market on Dec 6th. In fact it was ungodly cold! Not only that, Christine needed me to finish trimming out the basement rooms of the house in preparation for a party she had been planning to host on Dec 7th for our local Kurdish community. I didn’t get a chance to make my alegria that week. While a few intrepid souls stood around shivering on Saturday morning at the market I finished installing baseboard and closet shelves, something I didn’t mind one bit.

Okay, by now you probably want to know, “What in heck is alegria?” Would it help if I told you that alegria is the Spanish word for happiness and joy? It is also the name that Mexicans use for a candy made by mixing popped amaranth grain with a little molasses or honey and pressing it into cakes or bars. It looks a lot like those seed cakes sold at pet stores for feeding to parakeets. Alegria is commonly sold by street vendors and in open air markets throughout Mexico and has been made since the days of Aztec civilization. It is simple to make and it is a tasty and nutritious snack. So why not make some alegria and share some happiness and joy at the Harrisonburg holiday farmer’s market?

It’s a lot of fun to make alegria. You start by finding a clean and dry skillet. It is very important that it is clean and dry. Use a large stove burner and set it at high heat. Use no water or oil in the skillet. You will need a cover over the skillet, preferably made of glass, so you can see the popping amaranth grain. Have a clean dry brush near by and a large (no plastic) pan to dump the popped amaranth into. Once the skillet is hot, scoop about a ¼ cup of grain into the skillet, cover, and immediately begin sliding the skillet back and forth on the burner as the grain begins to pop. The objective is to keep the grain rolling as it pops in order to avoid sticking and burning. The popping will continue for about 30 seconds to a minute, and begin to slow down. Dump the skillet immediately once the popping has slowed and brush out any grains still sticking to the bottom or sides of the skillet and return to the burner to repeat the process. This process moves rapidly once you start and requires some practice. You will most likely burn a few skillets full until you get the hang of it, knowing when to dump and how to keep it moving smoothly.

When the dish pan is about ½--3/4 full add about 1—2 cups of honey and stir until the mixture is well mixed and sticky enough to press into balls or squares. Press firmly into a lightly buttered pan and chill. One can form the candy and lay it out like cookies on a sheet or cut it into desired shapes after it has chilled.

Now back to my story. I made my alegria on Thursday night Dec 11th with plans to go to the market on the 13th. On Friday afternoon I got to thinking, “I should have something else to sell besides eggs and alegria tomorrow.” So I go tramping down to the cauliflower patch just to see if there might be something there worth salvaging. I immediately saw some exposed heads that obviously had frozen and thawed several times and were a little soft on the surface but, I figured, “We could probably still get some good out of them,” so I picked them, about a five gallon bucket full. Then I got to pulling the wrappers off some more small heads and lo and behold there were some pretty little baseball sized heads, still firm and with little freeze damage, apparently sufficiently protected by those wrapper leaves. They were not full sized but they would sell! I ended up with about three buckets full.

The more damaged heads were taken up to the kitchen and I realized within a few hours that I had made a mistake. The whole house stunk! After a few more days of eating frozen and cooked cauliflower in about everything my wife could think of putting it in, I would realize that I had really made a mistake! By then other things besides the house were stinking.

I went to the holiday market the next day and I was pleasantly surprised. It was a little cold but I had dressed for it and the wind was not blowing, so it was not all that bad. There were a good number of vendors there and enough shoppers to make it all worth while. People loved the alegria and I could have sold more. Several even thought my slightly frozen cauliflower was beautiful. And I sold most of it!

Posted by Marlin Burkholder at 9:22 PM