Several weeks ago Christine and I had the good fortune to visit one of my special elementary school teachers for a special occasion. 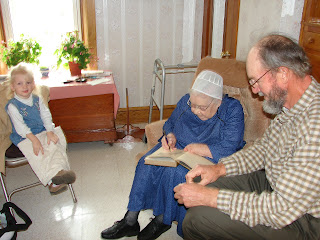 I had Miss Mabel Horst as my 3rd and 4th grade teacher in the 1957-58 and the 1958-59 school years at the old Singers Glen elementary school. I was nine years old the first year I had her and I remember sometime in one of those years she announced to the class her 40th birthday. She taught one more year at Singers Glen after the last year I had her, and then taught another 20 or so years in private Mennonite schools in the Hagerstown, Maryland area where she had grown up. I had not had any contact with her for most of the 50 years since I had had her as a teacher. It was a joy to find her at a relatively healthy 90 years of age residing at a Mennonite owned retirement home in Maugansville. MD.

Miss Horst was a highly dedicated teacher who always began the school day with a Bible story and prayer back in the days when those activities were still permitted in public schools. She taught both third and forth grades in the same room for both of the years I had her. At the beginning of the school year the Bible story book she read from began with the creation story in the first chapter of Genesis and by the end of the school year it had covered most of the Bible, ending with the stories of Apostle Paul’s missionary journeys.

During my growing up years my parents took us to a conservative Mennonite church but there was ongoing tension within that church over conservative-liberal issues relating to worldly dress and entertainment, resulting in our family not being well accepted in the church. I do not remember going to Sunday school regularly during those years or having many positive memories of my parents relating to the church leaders. This span of my life paralleled the years of the civil rights movement, hippies, student unrest, and the Vietnam War. I passed through my teenage years uncertain if I would remain connected with the Mennonite church and at times unsure if I really believed in God. Looking back I acknowledge that even though my church experience wasn’t what it should have been, it still was better than no church.

Miss Horst was a very conservative Mennonite lady but she modeled genuine Christian character and made lots of effort to instill in her pupils Christian values that went beyond mere adherence to conservative custom and tradition. Once during my years in her classroom she had her students competing for a prize for memorizing the Christmas story in Luke chapter two and I won the prize, a book entitled Bible Pictures and What They Teach Us by Charles Foster. It was the Bible stories remembered during the two years I sat in her classroom and the brief descriptions of the roughly 400 illustrations in that book that laid the foundation for much of what I know today about the Bible.

The book I had won was just a simple Bible story book written to a level of mid
elementary school understanding, but it was a reprint of an edition first copy written in 1886 and as I grew older I began to realize that the artwork of those 400 woodcuts and lithographs was superb and although I didn’t look at them often, I began to cherish them when I did.

This precious book was among the wall full in the library where the house fire of last year burned the hottest and it was among the first that I thought about and wondered if I would find any traces of as I dug through the rubble a few days later. There were many books in that collection that I valued a lot and would miss, but this one was special because Miss Horst had written a short note and her signature on a flyleaf inside the front cover. Finally I found a fragment of the front cover with part of the title and the name of the author still visible.

I knew that this book might be difficult to replace due to its being an antique edition long out of print but even if a copy could be procured it still wouldn’t really replace the memories I have associated with it. But I was fortunate to be living in an age of Internet access and I couldn’t resist the urge to pull up Google and type in the title of this lost treasure to see what might come up.

Lo and behold there were indeed websites that listed book sellers throughout this country where copies of this book or something close to it could be ordered online. I finally settled on one that looked like what I was looking for and advertised to be in good condition. The only difference I could see from the thumbnail picture on the Web page was that the covers would be brown instead of blue like the copy I had lost. When the book arrived in the mail I opened it and “Yes indeed, everything between the covers was pretty much exactly as I had remembered it!”

So now we go back to our recent visit with Miss Horst. The picture says it all. She autographed once again the replacement copy of a simple book that represents the influence that she most likely left on my young life that may have helped to keep me from rejecting the Christian faith. And now I can look forward to sharing this regained treasure and the story behind it with my grandchildren.

Posted by Marlin Burkholder at 1:12 AM

Email ThisBlogThis!Share to TwitterShare to FacebookShare to Pinterest
Labels: People that inspire me.

Dear Mr Burkholder, we were so sad to learn back in the fall that Mabel had died in March 29, 2009.I was surfing the web looking for her obituary and came upon your touching posting. Mabel also held a very special place in my family's heart as she spent over 35 with us during the summers and most holidays in Lancaster, PA.

Mabel was family and never did we think or treat her otherwise. She had a giggle that would tickle and a sense of humor that was priceless, which I am sure you observed during your visit. I am especially glad you posted a picture because most of my family hadn't seen her in 15 years and I have sent on to my parents and siblings. Many thanks for bringing back her special memory :)