Here we are at the middle of November, a little more than a year later than the last time I posted on this theme. For the benefits of those who won’t spend much time digging around in the archives of old blog posts, I will remind them that I had been gloating a little on the success of last year’s fall planting of cauliflower. I had posted spectacular pictures of about three colors of the various varieties I had grown. Sometime during the ensuing months something screwed up the server that allows the pictures to load. I’m either too dumb or too impatient to figure out how to edit pictures on old posts in order to fix the problem. Since I am fairly confident about posting pictures to new posts, I am just going to do them again on this post. I’m telling you though, that this year’s cauliflower crop has not done nearly as well so no more bragging this time around. 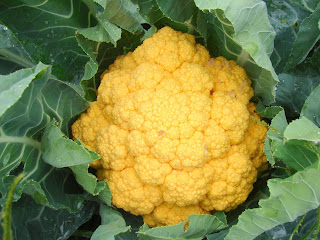 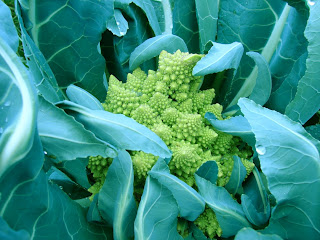 The first killing frost occurred about a month ago. There were several of these in succession, the last of which caused the last planting of tomatoes to bite the hay mulched compost enriched earth on a Sunday night. Those tomatoes were in a plastic covered high tunnel and I was assuming that they were safely protected so I had spent that Sunday afternoon reading and sleeping instead of going out and placing additional row cover over the plants—an activity which might have saved them for another several weeks of production. Of course I was disappointed and ashamed of myself when I discovered the frost blackened plants the next day but I didn’t need to complain long for that planting had produced abundantly throughout September and halfway through October—a time of year when we normally don’t expect much from our tomato patches.

The highlight of this year’s fall garden has been the abundance of greens, two kinds of kale, early mizuna (Japanese mustard), white Hakurei (Japanese) turnips, Napa Chinese cabbage and, ah yes, the Asian pears! Some of those puppies sold for over $2.00 a pear! I admit that it was kind of fun to set a bushel of those things from the back of the truck onto the market table and within a few hours to turn them into about $160! Oops, am I bragging again?

Several weeks ago they staged the grand opening celebration for the new Harrisonburg Farmers” Market pavilion, complete with speeches by the city mayor, blue grass music, cake and apple cider, face painting, clowns—the whole enchilada. There was a scarecrow contest among the vendors with each vendor pitching in a few dollars or some of their product to a kitty for the winner to take all. My live in hired man and market helper decided to paint himself up and pose like a frozen statue, changing position occasionally, to freak people out. It was a real hoot to stand back and watch people walk past him. Of course he won the contest, hands down. 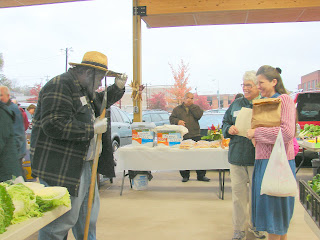 This past Saturday I went to the market possibly for the last time of the season. I still had a lot of Chinese cabbage which I have been holding in the walk in cooler, plenty of fall greens, and as much of the belated cauliflower crop as I could harvest before serious cold weather sets in this coming week. I actually was able to make a pretty impressive pile of bright orange “Cheddar”, dark purple “Graffiti”, and snow white “Freemont” cauliflower on one of my tables. I sold most of it and went home with less than a dollar short of $400 in total sales for the day—not bad for mid November. If I could have gotten another dollar for each time I answered the question “Does it taste like cheddar cheese?” I probably would have cleared $1000 for the day! I really had to suppress the urge to stick my tongue way up into my cheek and respond “Oh yeah, just slice it onto a hamburger along with a slice of onion, add the mustard, tomato, and dill pickle, and away you go!” When the seed supplier that now sells “Cheddar” cauliflower first offered this variety about five or six years ago, they called it “Citrus”! Yep, you guessed it. “Does it really taste like citrus fruit?” “Why of course! Just add the bananas and coconut and a little whipped cream or ice cream and you are all set.”

Aren’t people a lot of fun?

Posted by Marlin Burkholder at 12:56 AM