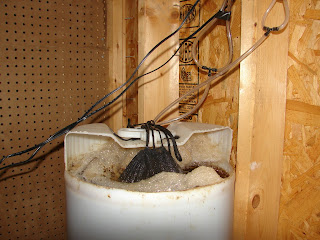 Out in my garage on the right end of the workbench sits one of my latest home made contraptions. It consists of a fifteen gallon plastic barrel (originally used as a container for acidic cleaner used on a local dairy farm) with part of the top cut off. Suspended inside this recycled container is a three gallon capacity bag made from a piece of plastic window screen folded and sewed along its bottom and one side and with a hem around the top threaded with a drawstring so that it can be filled with compost, drawn closed, and hung from the handle left on the top of the jug. Two aquarium pumps hang on the wall behind the apparatus, each with an air tube that snakes down through the filler hole on the back side of the top and on down to the bottom where they are threaded into quarter inch holes drilled into opposite sides of a twelve inch diameter loop of stiff garden hose which fits snugly into the inside diameter at the bottom of the jug. More and smaller holes are drilled all around this loop at approximate one inch intervals. A drain tap is fitted into the bottom of the jug.

So, what is this contraption called, what is it for, and how does it work? It is called a compost tea brewer and it is designed to make aerobic compost tea. It works by having the bag filled with freshly made compost and hung inside the jug and the jug filled with water. Several fluid ounces of unsulfured blackstrap baking molasses are added to the water and the aquarium pumps are plugged in. All of a sudden this machine starts making this delightful gurgling sound as lots of air bubbles begin rolling out through the perforated hose loop and making their way to the surface. Turning this thing on leaves one with the feeling that something good is happening.

So why do we want to make aerobic compost tea? First one needs to think of what happens when we hang a teabag inside a coffee cup filled with hot water spiked with a half teaspoon of sugar and left to steep for three to five minutes. It’s the same idea multiplied on about a 100X scale. Valuable plant nutrients and microorganisms leach out of the compost into the water which is becoming the compost tea. The purpose of the aquarium pumps is to aerate the tea in order to ensure that beneficial bacteria and micro fungi (which need an oxygen rich environment in which to thrive) are favored. The molasses of course is to feed the organisms and to help them grow and multiply. If we didn’t run the aquarium pumps there would be a greater chance of the tea becoming anaerobic (oxygen deficient) which favors the growth of pathogenic (disease causing) organisms. I let this thing run for two to three days, then shut it off and promptly drain off the approximately twelve gallons of tea into my twenty five gallon field sprayer and go straight to the garden to spray it onto my cherished plants. The theory is that beneficial micro flora sprayed onto plants colonizes leaf space and compete with pathogenic organisms to suppress various blights and mildews. Plant nutrients dissolved in the tea are absorbed through the plant foliage and help to boost stressed plants. Any of the tea which runs off the plants onto the soil adds nutrients and beneficial microbes to the soil.

The concept of making and using compost tea was not new to me. I had read about it years ago in some of the late J. I. and Robert Rodale’s writings and had always been scared of trying it, especially on tomatoes (one of my favorite and blight prone crops). Somehow the idea of making up a concoction from plant debris that had been stirred upon, mixed with, and stored on soil and then spraying it on plants that are susceptible to a variety of blights which are known to originate and move onto the plants from the soil seemed like a sure fire way to spread blight not prevent or suppress it.

Then last winter one of the more cutting edge scientists in the field of soil microbiology, Elaine Ingham from Soil Foodweb Inc., gave an informative and inspiring presentation about the making and using of aerobic compost tea at our annual Virginia Association of Biological Farmer’s conference and got me all fired up about doing it myself. Her presentation convinced me that my previous fears about using compost tea made by steeping compost in unaerated water were probably well founded.

There was a vender at the conference trade show who had set up an impressive display and demonstration about making aerated compost tea. He would have been glad to sell to me for $60 a simple compost tea brewer made with a five gallon plastic bucket and one aquarium pump.

I thought to myself, “I have plenty of those fifteen gallon acid jugs lying out behind the tool shed and a squirrel cage fan salvaged from the greenhouse destroyed in the house fire. I can use it to blow air into my tea and have a considerably more capacious brewer for almost nothing.” When I got home and started to put my tea brewer together I soon found out that the squirrel cage fan was not going to work to pump air into my tea. So I ran off to Wal Mart to buy myself an aquarium pump for about eight dollars and since I was going to be aerating 15 gallons--not 5 gallons of water I decided that it might be a good idea to get two of them. That meant that for sixteen dollars plus a few dollars more for a drain tap on the bottom of the jug I could still have my three times more capacious brewer for one third the cost of the five gallon version, well under budget.

With busy spring work coming on with the speed of an afternoon thunderstorm, I never got around to completing my compost tea brewer until mid summer. I kept putting it off partly because of all the stuff I felt I absolutely had to do and partly because I had some difficulty getting compost of the kind of quality that I felt confident would work. Meanwhile early blight was getting a head start on my early tomato crop. Finally I decided to go ahead and finish the project, use the compost I had, and hope for the best.

Once I got it all set up and running I felt so proud of myself and the sound of the water gurgling away out in the garage had a soothing and calming effect on my soul much like those artificial waterfalls one often sees in offices and hospital lobbies. As I listened to that beautiful sound I kept thinking “Alchemy!” This place sounds like an alchemist’s lab where magic is about to happen! So I dug out from underneath my office desk the old faithful Webster’s unabridged and looked up the word and discovered phrases like “form of chemistry and philosophical speculation practiced in the Middle Ages” and “search for methods of transmuting baser materials into gold” and “finding a universal solvent and an elixir of life”. I really liked that “elixir of life” part! So the concept of throwing together garden debris, lawn clippings, and kitchen slop and watching it transmute into “black gold”, (Yep, I’ve known some garden writers to use that very phrase to describe compost.) seems to fit. Somehow there has got to be a connection between what those early alchemists were doing and what I am doing messing around out in my garage! Not only that, but I am also taking my “black gold” and carrying it a step farther and turning it into something even more valuable by brewing it into “aerobic compost tea”. But this is not much chemistry but a lot more biology! I need a different word to convey that idea. “Albiolomy” is the best I can do. Nope! You won’t find that word in any dictionary!

While I was putting off completing the fabrication of my compost tea brewer I desperately mixed up and loaded my sprayer with a copper based fungicide and headed out to the tomato patch to bomb my ailing plants. After spraying the tomatoes and cucumbers a couple of times I watched the blights continue to spread, apparently unabated.

I have always hated spraying. And this includes many so called “organic” or “biological” pesticides. They all are a mess to handle and mix and they all stink! In addition to these two non endearing qualities, “organic” sprays are usually more expensive and need to be applied more often, making their “cost effectiveness” questionable. It is this disdain for using the spray materials I have been using in the past that has motivated me to play around with compost tea.

I will always remember the time I loaded my sprayer with the first batch of compost tea. It came out of the brewer the color of American coffee and it had this nice and sweet earthy smell. All I had to do was to drain it into my sprayer-- no donning of protective clothing, no calibrating, no mixing, and no triple rinsing the measuring cup I use to pour chemical into the sprayer. Why I didn’t even need to go looking for the cup! And most gratifying of all I didn’t need to panic if I accidentally spilled a little on my skin. I didn’t hate spraying this time and I was even a little surprised at how far 12 gallons went. 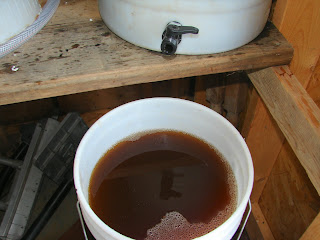 It is still a little too early to tell how effective this spraying of aerobic compost tea has been. I have yet to see anything dramatic happen as a result of using it. I will know more after using it over an entire season and after tweaking my compost making process and brewer operation procedures a bit. One thing is for sure. I’m going to keep trying.

There is something about this whole thing that just seems right, kind of like voting for a Republican political candidate! Well maybe I should say voting Republican feels right to some people and just leave it at that.

Posted by Marlin Burkholder at 12:20 AM

Email ThisBlogThis!Share to TwitterShare to FacebookShare to Pinterest
Labels: How we do things, My tinker toys

This looks like a fantastic contraption! I thought the idea of culturing beneficial soil bacteria was a good idea ever since I saw them doing it in Costa Rica! I hope you see some good results from this. At any rate, I think it's a great project!

wait... are you voting republican?