What a Difference a Year Can Make! 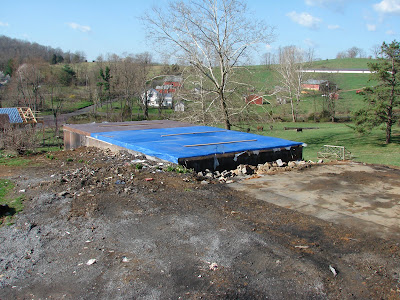 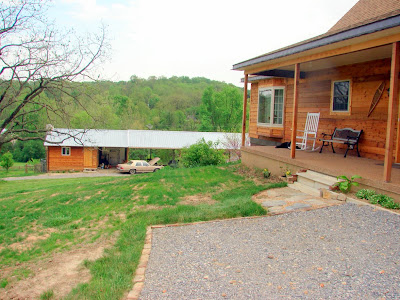 The two pictures of our house site were taken a little more than a year apart.

The first was taken in late March or early April 2007 soon after the debris was cleared and the foundation covered with tarp. It would remain looking this way for another three months as we sought to work out the details of preparing to rebuild. The winds of springtime did their best to try to take the tarp off and the site became even uglier as the tarp became increasingly tattered and we desperately tried to hold it in place by piling on dirty cinder blocks and scrap metal to hold it in place.

The second was taken in early May 2008 after the front yard landscaping was nearly completed and enough grass became established to make it possible to walk across the yard without getting muddy feet.

As I write this we are about one year removed from the time that we were finalizing the process of drawing up workable blue prints and lining up a contractor to get the rebuilding started. The actual building started in the first week of July and we were ready to move in by the end of December.

For most of the past year piles of demolition and construction debris clung like scabs to the broken and scarred landscape surrounding the house and were finally sloughed off and hauled away as springtime approached. Slowly but surely the yard and our emotions are healing.

This coming weekend we are looking forward to a family trip to Berea, Kentucky to attend our son Hans’s graduation from Berea College. We have rented two cabins at Red River Gorge state park located about 50 miles from Berea where we and some church friends, who are going with us, plan to lodge for about 3 nights. Red River Gorge is a beautiful wilderness area noted for its many rock climbing sites. My son-in-law Craig Good is talking of indulging himself in some rock climbing on Saturday afternoon. I’m looking forward to visiting Warren May’s woodworking shop in downtown Berea and purchasing one of his handcrafted Appalachian dulcimers. We will be attending Baccalaureate services on Sunday morning and the graduation in the afternoon.

The busy season in the garden is hard upon us. As usual I feel about a month behind in doing everything. Right now I cannot imagine how we coped last year, but we did, and we are going to do it again this year. The tomatoes, peppers, eggplants, string beans, lima beans, soybeans, corn, summer squash, winter squash, cantaloupes, cucumbers, and watermelons, all ought to get into the ground this week. This may not sound like much until I tell you that at least half of all of these categories are transplants represented by an average of 500 transplants per category. In addition to all this we are harvesting strawberries, lettuce, peas, fava beans, and asparagus, spraying the pears and apricot trees for fire blight, leaf curl and brown rot, looking after a few PYO customers, going to farmers’ market and fighting weeds. It is time to make hay and the steers need to be castrated.

Hey, I think I am going to stop writing about all this busyness and talk about looking forward to sitting at dusk in the recently bought rocking chair on our nice big front porch, strumming my dulcimer, and watching the fireflies.

Posted by Marlin Burkholder at 7:31 PM