A Story About Four Musical Instruments 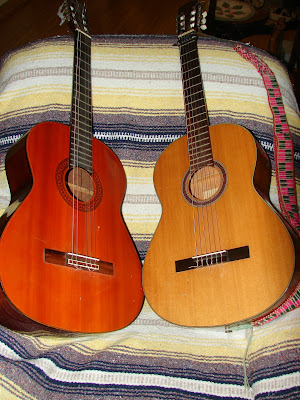 The pictures show four musical instruments-two guitars and two Appalachian lap dulcimers that currently reside at our house. The guitars are nice factory made instruments. The dulcimers are hand crafted "instruments of distinction". All of these instruments are special to me and all have a story behind them.

The guitar pictured on the right side of the guitar picture is the second guitar I have owned, bought in the summer of 1969 right after I had been discharged from the hospital following surgery on my right hand. I had suffered a complicated fracture of the index finger of that hand almost two weeks before and had gone without a positive diagnosis for a week following the injury. After X-rays finally revealed the true nature of the injury, doctors failed two attempts to set the shattered finger and had scheduled me for surgery to splice the broken bone together with wire. I can vividly remember my going to the music store right after leaving the hospital out patient department on the second day the doctor had failed to set my finger, and trying out that guitar. The salesman apparently was both amused and astonished to see me trying out guitars with my right hand wrapped with bandages and a splint. I think I was at least partly trying to assuage the mix of physical and emotional pain I had been enduring and still facing right after receiving the bad news that I would have to make yet another trip to the dreaded hospital for admission and surgery. The next day I was admitted and I was operated on the following morning. I spent the remainder of that day in agonizing post operative pain and immediately after being discharged the next morning, I went straight to the music store and bought that guitar for seventy dollars.

Several months later I faced the need for extraction of two severely impacted wisdom teeth, removed in separate operations spaced about a week apart. Both times I spent the evenings following the extractions in the upstairs of the old farmhouse singing and playing my guitar to take my mind off the throbbing pain in my jaw.

The guitar on the left side of the picture is one I picked up about twelve years ago for twenty dollars at an auction. I had paid thirty dollars for my learner guitar right after graduation from high school in 1967 and as my son Hans was then beginning to show some interest in learning the guitar, I saw this one as a considerably better instrument than the one I had started with and I bought it for him. He took to guitar playing like a young duck takes to water and today is dreaming of owning a $2000(?)Martin or something similar.

As I fled my exploding house over a year ago these two guitars were lying on a sofa and easy chair in the living room and I grabbed them, one in each hand, seconds before bolting out the door. I could have grabbed more valuable things like my dulcimer(It has a story behind it too.)or the $350 digital camera I had just bought several weeks before. Hans would later tell me how grateful he was that I had saved that guitar because it was the one that got him started with a passion that will take him to much higher levels of accomplishment than I will ever attain. 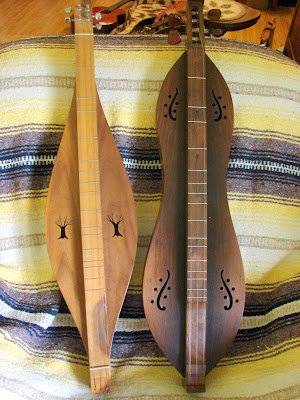 The instrument on the left side of the dulcimer picture is one Hans made himself in an inter term class on instrument making he took several years ago while a student at Berea College in Kentucky. He built two dulcimers in that class-a lap dulcimer and a small hammered dulcimer, and he did a fine job on both of them. I only wish the picture would show in more detail the most interesting and original tree shaped sound holes he cut into the face board. Another interesting feature is the walnut wood grain pattern showing a graceful curve of contrasting heartwood and sapwood in the strum cradle at the lower end of the instrument. Most important of all it has a really nice mellow sound. I still regret not taking this instrument with me to show to Warren May when I went to buy my new dulcimer from him this past spring.

The other dulcimer of course is the one I recently bought from Mr. May when our family traveled to Berea to attend Hans' graduation. I had first visited his shop and showroom in downtown Berea about six years ago when there to attend my daughter Rhonda's graduation. I was so impressed by his craftsmanship with not only dulcimers but also furniture, and wowed that if I ever have a reason to buy another dulcimer, I want to get one of his.

I had decided in advance that I would probably buy one of his middle of the line instruments which would cost in the range of $450-$500 but I walked out of there with one of his top of the line instruments which set me back monetarily for about $700 including sales tax and a few amenities like a songbook and a carrying case. That's ten times what I paid for the other dulcimer during my student days at Virginia Tech way back in 1971! Several things that make it special is his signature engraved into the strum cradle, several flowers wood burned at intervals onto the fretboard, book matched face and backboards, and an inlaid strip down the middle of the backboard. All of his instruments sounded fabulous, but this one, made of walnut back and sides with a Brazilian rosewood face board, sounded just a hair more fabulous. What really made this experience special was chatting with the guy who made it and watching him put on some extra finishing touches(some of which I specially requested)like the extra fret between the sixth and seventh frets and extra grooves in the bridges on either end of the instrument which allow alternative spacing of the strings for some special tunings.

Will I care what I paid for this work of art a few years down the road when its tone will have mellowed and matured even more from long hours of being played? Nahh!!

Posted by Marlin Burkholder at 11:59 PM

Email ThisBlogThis!Share to TwitterShare to FacebookShare to Pinterest
Labels: My Passions