The Craft of Grafting 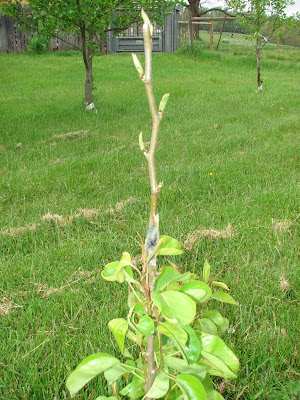 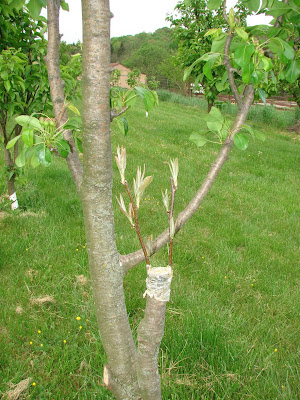 I have always wanted to try the art of grafting trees. The concept seems simple enough. You take a small twig from the tree you want to graft from, cut the lower end into a wedge, cut a slit into the tree you want to graft to, fit the wedge shaped twig into the slit in a way that the sap wood of the two are in contact, and cover everything up good and tight with grafting tape and wax. Should work shouldn't it.

I remember first trying it as a teenager. Somewhere I had gotten my hands on a book or magazine which featured these neat diagrams of various grafting techniques--whip grafting, cleft grafting, bridge grafting, bud grafting etc. Bud grafting looked to be the simplest of all, just peel a bud off the tree you want to graft from, cut a T shaped slit into the bark of the tree you want to graft to, lift up the bark on the vertical part of the T, fit the bud under the bark, and wrap with tape. So that is what I decided to try. I don't remember if I was ever successful.

During the ensuing years I never had a good reason to try grafting again. I went to college, got married, and became a dairy farmer. Out of sheer necessity I learned how to do such things as assisting complicated calf births, giving intravenous injections to cows down with milk fever, and doctoring foot rot or acute mastitis, but I never messed with fruit trees much. Oh I did learn how to prune trees in a "learn by the seat of your pants" sort of way, but I never needed to do any grafting.

Then about ten years ago I started planting some pear trees. Well it turned out that several of the varieties I had selected turned out to be real duds. They were susceptible to fire blight and they just wouldn't ripen right. I fooled with them for a couple of years after they reached bearing size without ever getting a decent crop and finally decided that they were not worth messing with any more. I did have one variety that I was happy about. This variety grew into a nice shaped tree that was relatively easy to prune (not true for most pear trees),resistant to fire blight, and it produced wonderful tasting and nice sized fruit that did not turn to mush as it started to ripen. In short it was everything you would ever want in a pear tree.

So last year I decided to turn all of my dud pear trees into Magness pear trees. I had also planted a bunch of Asian pear trees that, although difficult to prune, thin, and keep free of fire blight, their fruit so enamored me that I decided they were worth keeping. So I had my excuse to play with grafting again. I decided to take scions off my Magness trees and graft onto the duds on the upper end of the orchard and to graft scions off the Asian pears onto the duds on the lower end.

It was already too late to be grafting when I went out in late April to early May and sliced off some scions and stuck them into some trees. The trees were already leafing out and every one of my attempted grafts promptly wilted and died.

Last winter I decided to try again. I got on the Internet and pulled up some nice diagrams and read up on the subject. My biggest mistake had been my failure to collect my scions when the trees were still dormant and to do the grafting in early April just as the buds are beginning to swell.

I already had one strike against me. Most of the trees I wanted to graft onto were past the age for optimum grafting success and had been so damaged by fire blight and repeated hacking back that I no longer had nice rootstock to graft onto. Most would need to be cut back to a one to two inch stump and cleft grafted. One offered only a good sized water sprout that I decided might work for a whip graft. A whip graft is considered to be one of the more challenging to execute, but if successful, makes a smoother and stronger graft and is the preferred choice of professional grafters. The main thing of importance is that the scion and the rootstock needs to be approximately the same diameter, no more than one half inch.

So I bought some grafting wax, sharpened my pocket knife, cut my scions in early March, and stuck them into the ground cellar. When I brought them out to do the grafting a month later, the buds on the scions were already starting to swell despite being cut from the tree. I got along okay but found it necessary to melt down the estimated amount of wax I would need ahead of time instead of trying to soften it in my hands like the instructions said. It was a cold day and the wax incredibly sticky and difficult to work with. I ran out of melted wax when I still had a few more trees to do. I had poured the melted wax onto some waxed paper laid into a small dish. I was getting tired and frustrated and did not want to run back to the house to melt more wax so I decided to take a shortcut on the last few trees by wrapping the grafts with the sticky wax paper instead of properly sealing them with copious amounts of wax like I was supposed to. I thought to myself, "If this works I am going to be surprised!"

I eagerly watched my grafted trees daily and after about a week one or two grafted twigs began to show signs of coming to life. Meanwhile the remainder of the trees were leafing out nicely. Over half of my grafts were showing no signs of growth and appeared to not be taking. However I consider myself a patient man and thought it prudent to give them plenty of time. Every couple of days I would check again and each time I would find another twig or two beginning to bud out. It must have been about two weeks before the whip graft started to show signs of taking. I had all but given up hope and when it became clearly evident that it was going to succeed I was elated. Meanwhile I watched the trees that I had done the "quick and dirty" job of wrapping the grafts on and they too began taking. Somewhere I had read or heard that professional grafters can expect 80 to 90 percent success. I considered that if I achieve a 60 to 70 percent success rate I will be doing bloody good. I kept watching my grafts and a few finally began growing as much as a month after I had made the grafts. When it was all over every one of the eight trees I had grafted onto had succeeded and of the 15 or so twigs I had grafted only one failed to grow. Eventually I will have to prune away some of the grafted material. Not bad for an amateur eh?

You know what? I just recently read in an issue of "Growing for Market" that someone is successfully grafting heirloom tomatoes! Really?! Will I ever try it? I'll surely let the world know if it works!

Posted by Marlin Burkholder at 10:13 PM

Email ThisBlogThis!Share to TwitterShare to FacebookShare to Pinterest
Labels: Farm Stories, How we do things