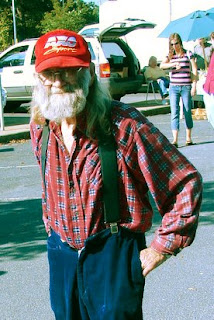 It is a typical summer morning at the Harrisonburg Farmers’ Market where I go on Saturday to sell some of my farm produce. I have had a busy morning and now somewhere between 10:30 and 11.00 o’clock business has begun to slow down somewhat and I pull out from the back of the van my folding wooden chair and sit down a spell to rest my tired legs and lower back. An elderly man with a wavy grayish blond beard and hair that flows out from under his worn red farmer’s cap and reaches down over his shoulders and partially covers his faded flannel shirt and black suspenders that loosely hang his khaki trousers on his slender frame, slowly ambles over to the front of my canopy and greets me with a cheery “Hello”. “I see you still have plenty of everything.” is his quite predictable comment. To which I usually reply with a grin, “Yeah, plenty of everything but money.” “Oh I have never had much money either but the good Lord has always taken good care of me ever since He gave me my land and told me that He wanted me to grow vegetables.” he tells me once again. He usually soon gets around to telling me that it’s getting about time for him to slow down a little but that he has no intention of retiring. I always remark that “I have already been retired for fifteen years but that I keep on working in order to keep from getting bored and to earn enough money to live on.” Then follows his oft repeated story of how he came about buying his 20 acre farm in the 1940s, how the late Dan Stickley sold him at no interest the farm equipment he needed to get started, and how Earl Wetsel allowed him to purchase seed and pay him back with S&H green stamps when the harvest came in. “I was so poor I couldn’t have bought a settin hen if she was fat!” He chuckles.

At the age of 87 Clarence D is the oldest vendor regularly present at the market and quite arguably the original vendor at the market long before it came to be known as the Harrisonburg Farmers’ Market. Clarence began selling vegetables from the back end of his battered pickup in 1960 when the Harrisonburg Police Department gave him permission to set up at the upper west corner of the then Harrisonburg municipal parking lot. Sometime in the early 70s a bi-level parking deck was built on the site and Clarence joined as one of the original vendors when the HFM was organized in the summer of 79 and set up on the lower east side of the deck. Today Clarence proudly declares that he has been in business for over 45 years and that he is able to pass for organic certification because “he has never used no chemicals since he began growing vegetables”.

I first vaguely remember seeing as a kid Clarence set up at the municipal lot when I would come to town shopping with my parents in the 60s but I was not all that interested then. I really came to know Clarence when I began selling at the Harrisonburg Farmers’ Market in 1992. At that time he would wear a cone shaped hat he had made from a piece of cardboard bent and glued to an old adjustable hat band. When he wore it he looked kind of like an aged hippie crossed with a Vietnamese coolie farmer. He drove a 1958 vintage Ford Econoline pickup-van with a covered bed homemade of two by fours and weather beaten plywood. That old van finally died on him sometime in 2005. He still uses an ancient cast iron balancing scale that looks like something dragged out of the ruins when the Visagoths sacked Rome. He tells me that a friend of his was going to “haul it to the junk” when he squirreled it from him. It would really be interesting to be around to see what it brings someday when it comes up at an auction with a couple of antique dealers competitively bidding on it. 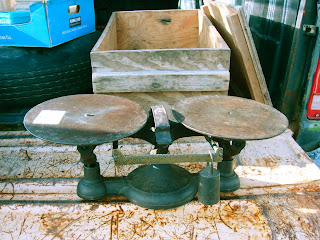 Yes, Clarence is a simple and humble gentleman who never had a lot of education but who possesses a lot of old fashioned wisdom and a heart of gold. He has never had a lot of money nor a desire to get it. He proudly tells me that he feels that he has been blessed with a good season this year on his one half acre of market garden. He started out the season with a goal of making $500 and when he reached that goal he set another one of making another $500. Then the good Lord allowed him to make that one too. His homemade coolie hat has worn out long ago, but I can still picture him in my mind wearing it and standing behind his old balancing scale with his old Ford pickup loaded with bags and boxes in the background, making quite a picturesque scene. He is almost as photogenic today with his red cap replacing the homemade one. He is a perfect picture of contentment.

He once told me that he once spent a few days in a nursing home following a brief illness. “I wanted to get out of there as quick as I could because I think that a nursing home is nothin but a place where people go to wait to die!”

I am thankful that I have had educational opportunities that Clarence never had and that I was able to take advantage of them. I am thankful that I am still relatively young, can grow vegetables on three or four acres instead of one half acre, and can take advantage of the newest technologies to work my land and run my business. But when it comes to growing old, the example that Clarence is setting is very much the one that I would like to follow.

Posted by Marlin Burkholder at 12:22 AM

Email ThisBlogThis!Share to TwitterShare to FacebookShare to Pinterest
Labels: People that inspire me.