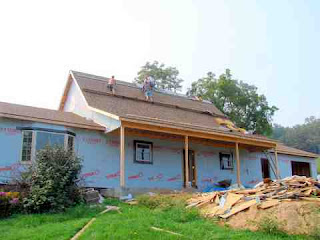 The house is definitely taking shape. They shingled the roof this past week and hung most of the drywall. From what builders tell me that means the house project is half way to completion. There still seems to be an awful lot to do yet. Just cleaning up debris still remaining in the yard (including what the builders are now adding to the piles) and relocating the fences will be a monumental task in itself. Despite the mess, we feel good about how the house is turning out.

We did most of the architectural design ourselves after being advised by one prospective builder to hire an architectural firm to draw up plans. To do so would have added about 5% to the cost of the house, something we immediately balked at. We got out a number 2 lead pencil, some graph paper, and a foot long ruler and went to work. We figured that if one has a skill worth $10,000 he had better use it.

What we came up with is basically a modified cape cod style with a one story 16' section on the south end, a one and a half story 36' mid section with an eight foot deep porch across the front and a two car sized garage-shop with a 5/12 pitch roof (same as on the south end) and one roll up door for a car entry. A walk in door was spaced between the roll up and the house so that if someone decides later that they need the second roll up, all they will need to do is to knock out a few studs. The entire east side is one open great room including a parlor with vaulted ceiling on the south east corner, family room in the middle, and dining room-kitchen next to the garage. The upstairs portion of the Cape Cod section is one long 16' x 36' room which will be used initially as a guest bedroom with ample attic storage along the sides. This room is big enough to allow a bathroom and two medium sized bedrooms to be inserted in the future if needed. An eight foot wide bay window graces the east side of the parlor. Master bedroom, master bath, steps to basement and upstairs, sewing-work room (can be used as a bedroom if needed), and laundry-half bath room occupies the entire west side.

The basement area has been rearranged and plumbed to accommodate a kitchen-dining room, bathroom, living room, and bedroom and will be usable as an apartment (Building codes do not allow us to call it this.) The painting, flooring, and kitchen will be completed as we have time and money. (Christine has already purchased used kitchen cabinets.) In the near future we will likely use this space to house exchange student-farm trainees or possibly renters who would be able (or willing) to help with farm work or do farm sitting as part of their rental arrangements. If our intentions to avoid moving to assisted living and/or nursing home when Christine and I become too decrepit to care for our selves carries through, this basement may become our dotty quarters. This will depend upon our success to attract family (our own or someone elses) to take over the rest of the house and be able to meet our needs.

Aside from mentioning on a previous post that much of my planting got into the ground as much as a month late, the growing season proceeded as normal, extreme heat and drought through July and the first half of August and monsoon like rains in the last half of August. The tomatoes took off with a bang in late June-early July and are mostly dead from blights by the end of August. The cucumbers suffered a similar fate. The melons mostly ripened within a few days and, because I didn't have the walk in refrigeration up and running yet, I lost about half of the crop because they over ripened before I could get them marketed. I fought deer, cucumber beetles, flea beetles, and harlequin bugs with varying levels of success and failure. I am experimenting with more varieties of edamame soybeans and am having a little better success marketing them this year. Three varieties of heirloom pole snap beans and one heirloom lima bean with extra long pods are maturing now and doing well. Red raspberries are coming in now and if the monsoon rains hold off and we get no hurricanes, we might have a good crop.

Last week I got the Shingles. The shingles on the house are pretty. The Shingles on my bottom are not pretty! When somebody once told me that Shingles hurt, they wudden kiddin! It began with extreme sensitivity on most of my right thigh which felt like a heat rash as I was working. I would take down my pants expecting to see a rash and see only normal healthy skin. After a few days an angry red rash of blisters fin 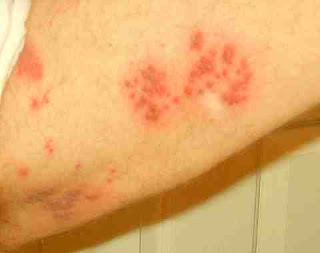 ally appeared on the inside of the thigh dangerously close to the privates (definitely not a nice place to have shingles). I thought initially that I would ride this one out but more rashes erupted and intensified over the following days and by Friday my leg felt like it was scalded and every five minutes or so I would get shooting stings that felt like I was being stung by hornets. Despite the fact that Friday was a "get stuff picked for market day" I realized that this thing was getting too hot and limped off to Emergicare (my regular doctor was out) and killed most of the day fighting heavy traffic and stewing in waiting rooms.

Finally I walked into a pharmacy with two prescriptions to hear the druggist say in a halting voice with a "Are you sure you want to do this?" sound that “This is going to cost $266”. I immediately hit the roof and made a few inquiries about possible alternatives, then reluctantly began writing a check. When the druggist finished processing my bill and then told me the total would be $297 I really went ballistic! "I thought you told me it was going to be $266!" I exploded. "No! That was just for the first one" she replied. "The second one is $31." Fortunately I was within walking distance of the doctor's office and I was able to go back to talk to him personally. He apologized a bit about not being aware that I had no insurance and that he had prescribed the expensive one because it is to be taken 3 times per day and that most people find it easier to take properly. Yes, he had one that had a generic version that would be less expensive but would need to be taken at 4 hour intervals five times per day. I dug into him a little more, inquiring how the cost per day would work out considering that the cheaper medication would need to be taken more often. He spent a few minutes pecking on his calculator, and then sheepishly told me that this medicine would be considerably cheaper, about $40. "This is going to save you more than $200 on your pharmacy bill.”

So much for how the American health care system works (or not works)!

I got home around 5:30 and helped Christine pick raspberries and beans for a couple of more hours.

Posted by Marlin Burkholder at 7:49 PM

Email ThisBlogThis!Share to TwitterShare to FacebookShare to Pinterest
Labels: My Occasional Rants, The house fire and recovery