Singers Glen, a Heritage to Treasure 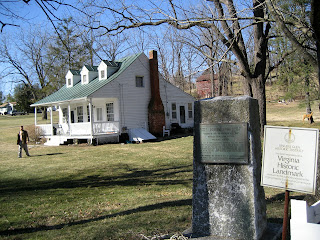 “Good music, like sublime scriptural poetry, is inexpressively sweet and nourishing to the soul and tastes strong of heaven”.

(Written by Joseph Funk in a letter to his married daughter, Mary Keiffer, who was living in Missouri during the 1850s, the time when Funk printed and published the earlier editions of Harmonia Sacra.)

On September 15-16, 2007 a significant community event took place in Singers Glen, the rural Virginia hamlet where I spent most of my growing up years and still live today. This event is the Singers Glen Music and Heritage Festival which has been held in Singers Glen roughly every five years since 1978. The highlight of the festival is the performance of the folk opera "Singers Glen", a theatrical performance written by Alice Parker, a well known writer, musical arranger and graduate of the Julliard School of Music in New York City. This drama celebrates the life of Joseph Funk during the early and middle years of the nineteenth century when he compiled and first published the shaped note hymnal Genuine Church Music, better known in this area as the "Harmonia Sacra", and conducted singing schools up and down the Shenandoah Valley. Christine and I were actors in this drama during the early years of its performance and it is from this experience that we deepened our familiarity with the "Harmonia Sacra" and share a passion for it today.

Mr. Funk was a well educated, deeply spiritual, and talented musician who left not only a unique collection of songs which are challenging and fun to sing, but also an enduring tradition of shaped note singing which is celebrated in Harmonia Sacra sings regularly held in churches and community centers in this area. Originally known as Mountain Valley, Singers Glen gets its name from the rich legacy left behind by Joseph Funk. 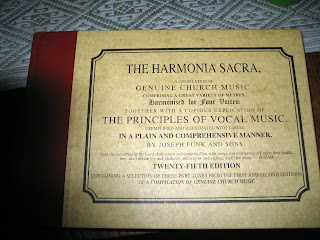 The Harmonia Sacra is but one of several shaped note hymnals which were used along with the promotion of singing schools on the advancing frontier throughout the South during the early nineteenth century. Others are Benjamen Franklen White’s Sacred Harp and Ananias Davisson’s Kentucky Harmony. 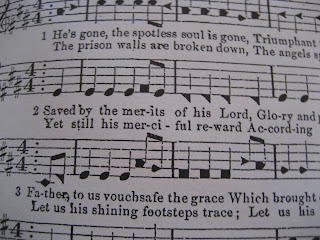 Several characteristics make the Harmonia Sacra stand out as unique when compared to other hymnals.

Second there are the robust rhythms which not only give the music life and vigor but speak eloquently to the strength and stamina that those pioneers of the early nineteenth century had to have in order to survive the rigors of life on the early American frontier.

As one sings these songs he cannot help but notice the recurrent themes which allude to the joys of heaven and the release from the pain and sufferings of earthly life. Virtually all families were touched repeatedly by death brought on by illness and other dangers of life on the frontier. In a life devoid of most of the comforts and securities which most of us take for granted in modern times, one can more easily understand our ancestors’ humble reliance on the “mercies of God” and their looking forward to a better afterlife.

And finally there is the beautiful poetry, fascinating forms of archaic expression, and the occasionally stark phrases that jump out and grab your attention. Where else but in the Harmonia Sacra will you find titles like "Divine Adoration" or "Sweet Affliction" and phrases like “Strengthened thus I still press onward, singing as I wade to Heaven” or “Oh this dreadful heart of sin, it may deceive me still, and as I strive for joys above, may plunge me down to Hell!”?

One of the more endearing Harmonia Sacra sings takes place on the first Sunday in August at the old Mauck Meeting House Church in the village of Hamburg near Luray, Virginia. The setting is a rustic and beautifully restored old log church building which has stood since the late 1700s-early 1800s. This is an all day event complete with several hours of singing in the morning, a potluck picnic (“dinner on the grounds” as the old folks would say) under the majestic old maple trees in the church yard, and several more hours of singing in the afternoon.

As folks enter the building, furnished with narrow and crude wooden benches and an ancient cast iron pot bellied stove in the center of the room, the moderator of the event greets them with a hearty handshake and asks some of them if they are able or willing to lead a few songs. If they say "Yes" they are likely to be called upon to lead several songs of their own choosing sometime during the service. The singing begins informally with the moderator leading the fist several songs and announcing a succession of several following song leaders, allowing them a little time to prepare to lead their songs. Each one typically leads about two songs, announcing the page numbers and song titles in both the old edition (the long book) and the “Legacy” edition (the new book). All singing is done “acapella” with no instrumental accompaniment. Occasionally breaks are taken to take a roll call of distant states where attendees may have traveled from to attend the singing, or they may announce the ongoing schedule of upcoming sings. This is the general pattern followed at most Harmonia Sacra sings.

The mid day picnic is an experience in itself, featuring the best of Mennonite home cooking and lots of joyful visiting.

When one considers all that makes the Harmonia Sacra unique, the robust rhythmic harmonies, the poignant imageries and sentiments, and the colorful poetry, and joins in a gathering of several hundred souls of the most experienced of four part harmony acapella singers, they can revel in the best of congregational singing and appreciate what makes the periodic Harmonia Sacra singings such an enduring tradition and the history of Singers Glen a legacy of such treasure.

Posted by Marlin Burkholder at 11:10 PM

Email ThisBlogThis!Share to TwitterShare to FacebookShare to Pinterest
Labels: Inspirational, My Passions

The Harmonia Sacra does contain tenor melodies, but this is also true of the Sacred Harp, another shape note hymnal published in Alabama.

If I am able I would dearly love to attend the event you described in August. I am not Mennonite, but I love the singing of old hymns as worship. I just looked on Amazon and found the Harmonia Sacra pictured (by Funk). Is that the book you would recommend? Thank you! (By the way, we have met via Crossing Creeks and spoke at the recent gathering for the new Co-op--am still looking forward to meeting your wife--the LORD bless you and your family.)