Why did it Happen? What does it Mean? 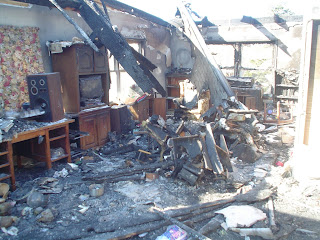 So Satan answered the Lord and said “Does (Marlin) fear God for nothing? Have you not made a hedge around him, around his household, and around all that he has on every side? You have blessed the work of his hands, and his possessions have increased in the land. But now stretch out Your hand and touch all that he has, and he will surely curse You to Your face.” And the Lord said to Satan, “Behold, all that he has is in your power; only do not lay a hand on his person. So Satan went out from the presence of the Lord” Job 1: 9 -12
As I begin to reflect upon and try to make sense of this whole experience, the following frequent thoughts and statements from myself, my friends and my wife come to mind.

It was only stuff! Once as we were picking through the rubble, I saw the char edged page of a booklet I had brought back from a trip I had taken years ago to south Florida to help rebuild houses damaged by hurricane Andrew. The page contained a panoramic photograph of blocks of residential housing completely flattened by that terrible storm as far as the eye could see.

As I stood in the midst of the devastating wreckage of my own house, my thoughts went to the remarks of one of my brothers who has been helping rebuild in the aftermath of hurricane Katrina a little more than a year ago. “For about four blocks in from the beach front there was nothing left but bare slabs, and for another six blocks in there was nothing but heaps of rubble—and it was like that for 100 miles!!” I thought of the destruction wrought by the Tsunamis in the Indian Ocean about two years ago affecting not only single communities but multiple countries. My own disaster pales in comparison to that! Not only was there mass destruction of unimaginable scale, there was also loss of life, in some cases, whole families. I had both the assurance that we would have a bed to sleep in that night at the next door neighbor’s house, and word from another that there was a nice house available for rent about 1 ½ miles up the road—all before the firemen had left the scene.

One needs to keep in mind that his possessions really belong to God. God allows us to have things in order to be productive and to derive a certain amount of joy from life. My thoughts continually go back to those few seconds I had to decide which items to take with me as I fled the house. I grabbed the two most visible things, my own and Hans’ guitars sitting on the couch and an easy chair. Why did I grab his relatively low value guitar instead of the $300 digital camera I had just bought about two weeks ago resting on top of the china closet near the kitchen door, or my prized dulcimer resting on top of the TV cabinet? Hans would tell me later that he was glad that I saved this guitar because it was the one that he had learned on and the one that inspired him to reach for the level of accomplishment that he has today. This made me feel a lot better about this impromptu decision. The question of deciding to choose to save items on the basis of monetary value was irrelevant in this situation. This fire has been a dramatic demonstration of how quickly one’s possessions can be taken away. It also demonstrates that our real value is not measured in how much we have but what we are. Certainly there has to be more meaning and purpose to life than the quest to acquire and hold material possessions.

I won’t even begin to try to understand why God would allow such a thing to happen to me or to anyone else. I don’t feel that my wife or me deserved such a calamity. Neither do I feel that it was God’s fault that it happened. I do feel that despite all the shock and pain, God is still there, He still cares for us, and that life will still go on.

It could have been a lot worse! If I had followed my usual routine that morning, I would have parked the big tractor in its usual place beside the diesel fuel tank and the little Farmall Cub tractor would have been parked inside the woodshed by the feed bin. I would have most likely been a distance from the house when the fire really took off and not near enough to warn my wife. We could very easily have lost all of our tractors and all of our motor vehicles and possibly some one’s life. 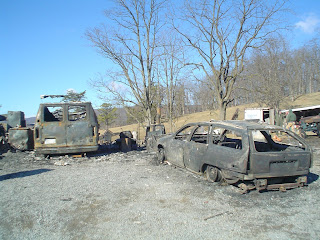 Is there anything we can do to help? The community response has been overwhelming! And not only have people asked if they can help, they have helped. Members of our local Old Order Mennonite community, with whom I have been swapping heirloom garden seeds for several years, have come forward with seeds to replace some of what I lost, garden tools, and a variety of home canned and frozen food. Our CSA members have offered things like a computer and telephone, a bed, and other furniture. Members of our church organized a barn raising work crew to rebuild the greenhouse and to get the packing shed-pole barn I had started constructing this winter, up and under roof. The local Kurdish community is planning a gathering and meal with us. Numerous persons have given money. My wife is a deeply caring person who is constantly thinking of others and wanting to give and to help out whenever she can. Suddenly she has found herself in a position where the help is coming to her and she and I both struggle to know how to receive it. I am glad that I had spent an hour or so a week earlier running up and down the neighbor’s ice encrusted lanes with my big tractor and disc harrow in order to cut the ice up enough to remove it. I am glad for all the energy we have invested in working to cultivate friendships and community in a diversity of cultures. Now as we find our selves in need, we are grateful to find that community coming to our aid and helping to assure that we will continue to be able to keep on giving back and to keep the circle going.

We have a lot to be thankful for! My wife keeps on exclaiming, “I feel so blessed!” We have a nice house to live in with lots of basement space to clean up the things we saved! We have friends! We have food and clothes! We have enough! We have hope! Thank you God!

We could so easily complain that God or the Devil really did us in but in reality God has provided sufficiently. None of us were injured physically and the emotional injuries, though painful, will heal and probably leave us stronger. More than two weeks after the disaster I still feel burned and battered inside. Like the cold snow squalls that have periodically swept our area for the past week, waves of depression have repeatedly blown into my soul with their chilly fallout and I struggle to keep my head together. Many times I have felt perilously close to emotional breakdown but giving up will not help the situation. There are too many people who need us and too much work that needs to be done.

Fortunately the sun comes out and the sky clears after the snow shower has ended. Emotional bruises are sort of like physical injuries such as sprained joints, deeply bruised muscles, and fractured ribs (all things I have experienced). They will heal with time and they heal best when one goes ahead with purposeful but careful activity despite the pain. Lying around and bawling over emotional pain or refusing to walk with a sprained ankle will cause it to stiffen and hurt worse. I am thankful that God is giving me the strength to work through the pain.

Tomorrow I am going to plant some seeds and transplant some lettuce.

Posted by Marlin Burkholder at 11:44 PM

My heart goes out to you and your wife in loss of your home. But you are in possession of the most important thing we can have in this life, and that is in the surety of the goodness of our God to His children. I discovered how firm a rock he is when we lost our 16-year-old son almost three years ago now. He has been my strength through everything since the moment those terrible words were spoken to me.

About your Bible and your treasured but damaged book...I once read that the best way to dry out old books is to place them unwrapped in the freezer and let it go through repeated freeze and defrost cycles. This may take a considerable time to accomplish, but the results are said to be good. I understand this is how the professionals do it. I was intrigued by this advice, so when the grandbabies spilt water on one of my favorite seed catalogs, I stuck it in my freezer. A couple weeks later it was in great condition. Not like new, but MUCH better than if I'd air-dried it or taken a hair dryer to it.

Good luck to you in your recovery efforts.