The Miracle of Seeds 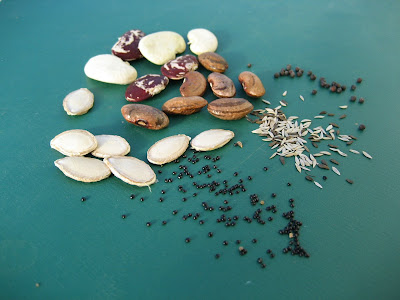 Seeds are wonderful things! They come in a myriad variety of size, shape, and color. However, all seeds hold two things in common. Externally they all appear to be dry and lifeless. Yet deep inside each of them is a tiny germ sized spark of life. When the right combination of light, moisture, and heat is present, that spark will cause the germ to divide and divide again and then to differentiate into root, stem, and leaf until a growing plant is formed. The emergence of life in this way is a miracle that always fascinates me.

I now share with you a bit of seed trivia. Have you ever wondered how big the world’s largest seed is? I have always thought a coconut would get that honor. The prize goes to the single seed of the “coco de mer” palm, measuring about three feet in circumference, a foot in length and weighing in at a respectable nearly 50 pounds! How about the smallest seed? It is not the mustard seed mentioned in the Bible. The smallest I have appears to be about the size of a grain of salt and numbers an average 45,000 seeds per ounce. The real winner is an orchid seed which numbers 35,000,000 to the ounce! What would be the longest time for a seed to retain its viability and be capable of sprouting? Most seed will remain viable for several years. I have some that is still fairly viable after being in storage for more than 10 years. A number of years ago I read that some amaranth seed found inside an ancient Aztec pyramid in Mexico sprouted and grew after an estimated 500 years. In 2005 some archeologists dug up some date palm seed from a Herodian temple in Masada, planted it, and watched it grow. Carbon dating estimated this seed to be about 2000 years old! What would be the greatest discrepancy between the size of a seed and the size of the plant that grows from it - an acorn sprouting to become a mighty oak tree perhaps? Are you ready? The seed of the giant sequoia measures a mere 1/16 of an inch in length, (about the thickness of a dime) and has produced a tree whose trunk is 20 feet in diameter and more than 300 feet tall, the most massive living thing known to exist! Now isn’t that something?!

I hold in my hands two containers of seeds.

In my left hand I hold seed descended from the seeds of a highly valued bean variety that was given to me by one of my farmers’ market customers about eight years ago. He told me that this bean variety had been grown by one of his aunts living in Tennessee since the days of his childhood. Because this particular variety of bean yields an abundance of long and wide superbly flavored pods, it was highly prized and saved from year to year by his family. He gave me some of these seeds because, as he said in his own words, “I think you will like them”. I have saved seeds from this variety myself for the years since he passed on to me this special gift and have given some to numerous gardening friends. I intend to continue saving these precious seeds and to pass them on to others.

In my right hand I hold some seed of one of my most noxious weeds. Most productive food plants have to be carefully planted at the proper time in the growing season into well prepared fertile soil, watered, pruned, weeded, and cultivated in order to obtain a worthy yield. When the harvest is over some of their seed needs to be properly harvested and stored in a safe cool dry place in order to be good enough to plant the following year. Weeds, on the other hand, do not need to be cultivated in order to thrive. If allowed to produce seed, weeds will pollute the field with seed that can be buried deep in the soil by the plow and lay dormant for decades until the right conditions allow it to sprout and grow uninvited in the midst of a planted crop. If the farmer neglects to remove them, they will overtake the good plants and either choke them out entirely or substantially reduce their yield potential. Many weeds are poisonous or have thorns that imbed themselves in our flesh and are painful to remove. Others produce underground roots or stems that break into pieces and are quickly spread all over the field or garden. These pieces will then sprout into more weeds wherever they fall and spread like wildfire. Weeds of some sort will grow in soil both fertile and infertile and will resist the farmer’s most persistent efforts to eradicate them. If broken off or uprooted from the soil, a crop plant will usually die. If a weed is angrily jerked up by the roots or whacked off, it will usually reroot or grow back from the stump. It takes effort to plant a crop, to keep it free of pests, and to nurture it to production. It takes effort to keep weeds from growing and spreading. Fortunately if the farmer succeeds in controlling the weed growth while the crop is young, the crop will grow big and strong enough to overcome the weeds and to grow on to a bountiful harvest.

We all are aware of the many kinds of obnoxious weeds that exist in our lives. Things like fear, worry, jealousy, greed, prejudice, hate, and anger pollute our lives, threaten to choke out our happiness, and interfere with our success if not kept under control. The seeds of these weeds can lie dormant in our subconscious minds for years to spring forth with a vengeance when circumstances favorable to their growth arise. They are the source of much pain and discord. These seeds are all around us, spread rapidly, and are difficult to get rid of. Fortunately they can be controlled.

I like to think that the positive values passed on to us by parents, teachers, and friends are like good seeds. Qualities like honesty, thriftiness, love, dedication, reverence, perseverance, loyalty, and respect, are planted into the soil of our lives to be cultivated and nurtured until they mature into the fruit of happiness and productivity. To grow a good crop a farmer needs to manage the soil in such a way as to maintain its health and fertility, and to prepare seed beds properly before planting seeds. The growing crop is cultivated, weeded, pruned, and trellised as necessary. The values we plant in to the well prepared soil of stable marriage built on Christian principles will grow and thrive if we tend that soil, remove the weeds, and apply rules and discipline as needed to control the growth of the crop, our children. As God supplies the sunshine, warmth, and rain necessary to sustain a growing crop, He will supply the blessings we are unable to provide in order to sustain our growth. The values needed to produce a crop of healthy, well adjusted, and productive God fearing persons need to be cherished and passed on from generation to generation or shared with friends just as we cherish, save, and pass on seeds of our best plant varieties.

Posted by Marlin Burkholder at 11:53 PM

Email ThisBlogThis!Share to TwitterShare to FacebookShare to Pinterest
Labels: Inspirational

I would appreciate permission to post a link to this Blog.