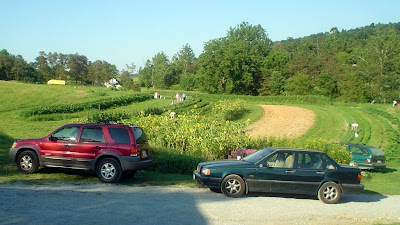 A familiar event regularly takes place around 3.00 PM on Saturday afternoons on our farm during the months of July, August, and into September. About two hours after I have returned from a busy morning at the Harrisonburg farmers market, grabbed a bite to eat, and (if fortunate) gotten a brief early afternoon siesta, our Kurdish friends begin pulling into our driveway for fresh “pick your own” tomatoes, cucumbers, peppers, eggplant, and Swiss chard. I have seen as many as three or four cars turn into our driveway at one time. Most of these cars now contain whole families and suddenly our market garden is transformed into a scene of colorfully dressed men and women happily walking up and down the rows, plastic bags in hand, chatting away in a language I’ll probably never learn to speak on a conversational level. A few minutes later they reunite in our garage and lay their bountifully laden bags on the table and floor, as they await checkout. Sometimes it gets rather hectic as we try our best to sort through their selections, making sure the right bags go to the right persons, and try not to make calculating mistakes as we tally up their purchases amidst answering queries about prices for specific items and children asking for permission to pet the cats. As children cavort in the driveway and all around our feet, the adults visit with each other in what can only be described as a joyous party atmosphere. Indeed our farm has become a regular meeting place for the rapidly growing Kurdish community of Harrisonburg, VA.

So how did this all begin? About five or six years ago we had found ourselves once again in the first week of August with the whole tomato crop ripening like a house afire. Everyone who has ever been in this kind of business knows that when the tomato glut hits one farm it hits them all. So there I was at our local farmers market with my truck loaded with beau coups of 25 pound boxes of dead ripe tomatoes, hoping to get rid of a few of them for $10 per box. All around me were other vendors trying to do the same thing. About then I began noticing men of apparent middle eastern descent walking up and down our market talking loudly. Soon they were at my booth asking me if I could sell them a box of tomatoes for $5.00. There was no way that I was going to let them have my precious “love apples” for $5.00 a box so I dickered with them and ended up letting a few go for $7.50. Knowing that there still remained bushels more still unpicked in the garden that were going to waste if not picked soon, I told some of them that if they were willing to come out to the farm and pick them themselves, they could have them for $5.00 per box.

The first to come were just men, usually several together. It wasn’t long till they noticed that I had a good supply of Swiss chard, and peppers. They especially got excited when they saw the small amount of okra and some dill growing around the house. By now I had sensed that they came from a cultural background where price dickering was a common practice (something I had gotten used to during my years of living in South America) so I was able to accommodate to that habit with a little bit of firmness. I was a little irritated when they would pull into the driveway and toot their horns (considered rude in American culture) if I was out in the field a distance from the house, but again I found it not hard to pass it off as a cultural indiscretion as it was apparent that their intentions were not to be rude. They always began with a friendly greeting and a handshake. At first their English speaking skills were weak and we both were a little nervous but those things all improved as with repeated visits we became better acquainted. Soon they began bringing their wives and along with them came the children.

As the Kurdish traffic to our farm gradually picked up and the list of sought after items grew beyond, chard, peppers, and tomatoes, we settled into a general routine of selling things that they picked themselves at 60% of what we would sell the same thing for at the market. On several occasions they brought me seeds of things they especially wanted me to grow for them that are hard to find in American stores (cutting celery and Armenian cucumbers) and once or twice their wives brought us samples of Kurdish prepared food. Though we began selling them tomatoes for 15-20 cents per pound, we have gradually gotten to the level of selling “pick your own” tomatoes for around 80 cents per pound early in the season and 50 cents per pound in tomato glut season.

In the weeks following the events of 9/11 we were glad to know that our farm had become a safe and friendly haven for a people whom we knew felt some of the animosity of Americans towards anyone of mid eastern descent or followers of the Islamic religion. By this time we were beginning to share our views and concerns of political events occurring here and in Iraq and to talk about our religious similarities and differences. We have given several of them Kurdish New Testaments and various other Christian materials written in Kurdish and have also accepted an English copy of the Quran and have looked at several Islamic websites and videos that our friends have given or told us about.

More recently we have felt honored to stand with our Kurdish friends when four men (all whom we know and trust) were investigated by the FBI, tried, and convicted of alleged illegal money transfer activities in federal court. We have visited in their homes, heard their stories, and are firmly convinced that they committed no serious crimes. We are thankful that they received relatively lenient sentences.

Posted by Marlin Burkholder at 10:55 PM