The Good Stuff Is A Rollin 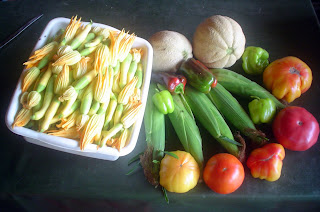 It is now mid July and we are now entering that most delightful time of the gardening season when most of what we have been toiling for since early February is now coming to fruition. The picture says it all. Well not quite, someone missed getting a quart of those luscious blackberries in there.

The season started out discouraging enough. The first thing that happened was I screwed up by not cleaning out the poop and litter from the greenhouse after I had finished using it as a chicken brooding house during the winter. I planted onions as usual inside the house on the grow racks in mid January and had them up good. When I set them out into the greenhouse in February they just flat out died. Apparently onion seedlings are sensitive even to a little ammonia vapor in the air. I’m normally pretty sensitive to chemical smells and could easily detect the smell of ammonia in the greenhouse, but I was not alarmed if it was not strong enough to knock me flat on my butt. Instead I had some idiotic notion that a little ammonia in the air might be a good thing inside a greenhouse and would stimulate plant growth. You live and learn!

After I thoroughly cleaned the greenhouse I started over and planted a bunch of lettuce, brassicas, and early tomatoes. I was all excited as I had bought several bags of “organic” potting soil from our local gardening center and it looked like good stuff, OMRI approved and all that. It all came up good and looked good for a couple of days. Then I waited, and waited, and waited. The lettuce never got much more that ¼ inch tall. The broccoli, cabbage, and cauliflower got about 1 ½ inches tall and turned purple. Two weeks from emergence the tomato plants had never shown signs of developing the first true leaves, and the baby leaves were purple on the undersides. The second planting of onions came up and went dormant. Despite all the hoopla written on the bag about how this premier organic potting soil would stimulate and sustain vigorous plant growth for nine months, nothing I had planted in it, and I mean nothing, was growing.

I had been through this scenario a couple of years before. After two to three weeks of watching my alive but dormant plants, I would pull up a few and discover virtually no roots. Now I was doing the same thing! Then I had thought the problem was caused by soaking my Winstrip planting trays too long in chlorine solution, causing a lingering chemical contamination problem. I felt by now that the Winstrips should be safe but I had planted in a bunch of them so I decided the time had come to throw them out. Meanwhile I continued watching some new conventional trays that I had planted a little later. I eventually concluded that they were doing no better. Fortunately I had planted some of my early tomatoes in some other potting soil I had left over from the previous year and they were OK. This left me with no other conclusion. Everything I had started in the new potting soil was not growing! Lesson II learned. Don’t ever buy potting soil in a pretty bag!

I salvaged about ½ of my sick plants, threw out the rest, and ran off to town to buy new potting soil similar to what I had been using before. From then on my greenhouse thrived. There was pretty obvious evidence from the appearance of my brassica and tomato plants that I had phosphorus deficiency in the organic potting soil and a tell tale sign as evidenced by a firing of leaf margins on my now month old lettuce plants that were not yet ½ inch tall, that I probably also had a soluble salt problem in the organic soil. I sent off samples to our state land grant university soil testing lab and a letter to the company that made the potting soil, explaining the problem and demanding a refund. The lab samples came back showing sufficient nutrient levels in the potting soil and no salinity. The refund came through several months later.

The dormant onion plants began growing when I slid them all over on fresh potting soil and I eventually got them transplanted to the garden, alive and healthy, but way too late for an early crop. Once again I failed to have “ready to market” lettuce by mid April and a lettuce glut in late May. June turned into a drought and I spent the last half of the month dragging drip tape and hooking up header lines instead of getting mid summer salads going. When it finally rained we got about 10 inches in three days. Now you know why I am exulting in a bountiful mid summer harvest!

The tomatoes were a little late getting started due to a cool spring and I am having to address some potassium deficiency problems (greywall) in the tomato hoophouses, but it looks like they are going to throw a decent crop (maybe the usual August glut). Peppers are loaded and have never looked better despite some dry rot in the middle of the patch. And those delightful Zephyr summer squash-they are a PITA to pick but fabulous to eat and they sell well. I pick them at 3 – 5 inches, put ½ lb in pint berry tills, and get $1.75 a pop. I planted a new and very promising muskmelon, Eclypse, which looks like it is going to mature later than my beloved Earliqueens and spread out the harvest. It looks like a very good year for melons. I’m starting to become well known for my habit of driving up the road for a mile in either direction and leaving a slightly cracked but still good enough to eat melon in everyone’s mailbox. And sweet corn! It’s much better than waiting for Christmas! Hey I’ve got to get to bed!

Posted by Marlin Burkholder at 10:33 PM