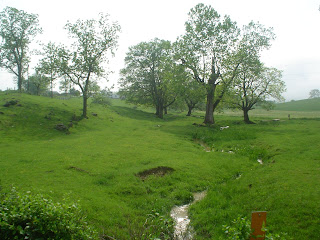 Yesterday I took a 20 mile trip over to a farm near the town of New Market to participate in a community work day for a fledgling organization known as “Crossing Creeks”. The Crossing Creeks organization began about ten years ago as a dream of a friend of mine, Earl Martin, who I had gotten to know following my years as a Mennonite Central Committee volunteer. Though he and I served MCC in different parts of the world, we became acquainted through local MCC alumni gatherings following our service terms. Earl had a son who became mentally ill during his teenage years and benefited significantly from a year spent living and working at Gould Farm in Massachusetts, an intentional community farm founded 80 years ago for the purpose of continued rehabilitation of persons recovering from mental illness. Earl’s dream was to found an organization modeled after that of Gould Farm to serve the needs of the transitional mentally ill in our area.

I became involved with Crossing Creeks during the organization’s formative years as they were looking for a local farm to purchase. The home farm where I had grown up near Singers Glen was coming up for sale and I had tipped Crossing Creeks that they might want to consider that farm as a suitable place to locate. Though efforts to negotiate with my family for the sale of the family farm to Crossing Creeks did not work out, I continued my interest and support when they successfully closed on the farm where they are presently established.

About fifteen volunteers met at the Crossing Creeks farm house around 1:00 PM. A few people were needed to do some painting and electrical repair work in the farm house basement and the remainder were going to do some outside work in the woods clearing out an old fence, weather permitting. I was already dressed in my most worn out work wear and insulated coveralls so I joined the half dozen or so gathering outside and trekked with them up the mountain.

It was not nice work. The fence was old and rusty and overgrown with thorny briers. There were places where wire had been nailed into growing trees and the trees had overgrown the wire. The fence had been patched several times over the years with rolls of fence wire overlaid on the original fence. Tree limbs had fallen on the old fence in many places. Our job was to cut the old fence wire off the posts and trees, clear away the debris, and roll up the wire the best we could and carry it to the edge of the woods where it could be loaded with a tractor.

As we began working another four or five people joined us. We were a pretty motley crew. There was one older couple who looked to be in their seventies. There were several middle aged women and one girl of about fifteen. The rest of us were fit as a fiddle guys ranging in age from 30ish to 60ish. I found myself working along side of a guy in his thirties who I soon realized was Crossing Creek’s only current resident. There have been about three other residents in the past two years who are now out and living satisfactorily on their own. Two others had to leave because Crossing Creeks did not yet have the kind of professional support they needed. He came from a rough family background and has struggled with alcoholism, drug addiction, and schizophrenia for much of his life. As we cut and pulled wire and thorns, he talked freely of his background and current struggles and how thankful he is of being at Crossing Creeks, of the help he is getting, and of being able to attend several local churches. As we worked I began to reflect on some of my own experiences and knowledge of stories I’ve either read or heard told by family and relatives.

Several generations ago, before the time of easily available modern machinery, good roads, and easy to access stores and medical facilities, it was common practice for people in rural communities to work together. Men from several farms would get together to organize crews for making hay, threshing grain and husking corn – work that was often hot, dirty, and hard. After working at one farm, they would go to the next one, and so on down the line until all the farms in the vicinity were done. Since they were largely exchanging work they didn’t always worry about paying one another with money. Similar things were also done to take care of animal butchering. The women would gather and prepare sumptuous meals for the hard working men and share the work of tending gardens and growing children. In some communities if the work was an all day affair they might get together a square dance in the barn and have some fun. A lot of socializing went on over and around hard work. When disease epidemics struck or someone was seriously hurt in an accident neighbors would pitch in to do chores for the ones laid up.

It’s not that way any more. Everyone has insurance to take care of the major difficulties in life and some live in fear of litigation if they become involved with someone outside of themselves and something goes wrong. Fast cars, good roads, and available money take us quickly to wherever we need to go to get what we need or want. All sorts of modern machines and tools have made it possible to reduce or eliminate much of the manual work that once was done. Significant segments of our society now spend time and money for exercise to keep their bodies strong and healthy. For the past several generations we have morphed into a culture that encourages us to go our own way, do our own thing, and keep our opinions to ourselves. We live in a strange world where modern technology enables us to both communicate instantly with someone on the other side of the world and to live in total estrangement with the folks living on the other side of the fence or wall.

I like to think that little by little we can recapture some of that community spirit that once held our rural communities together and made them tick. Crossing Creeks could have hired a bull dozer that would have cleaned up that fence row in an hour or two. The alternative was for ten people to get to know each other a little better, to knock out a nasty job that nobody minded all that much, and to be a part of a healing process that no one knows how far will spread. Eighty some households in the greater Harrisonburg – Rockingham area could just as cheaply buy their summer’s supply of vegetables at the Wal Mart Supercenter. But there would be eighty some less friendships in this world and I doubt that they would be as well nourished in body, mind, or spirit.

So I am deeply thankful for CSA’s, organizations like Crossing Creeks, and who knows how many other groups out there striving to work together to meet needs and to improve our world.
And yes, I’m even thankful for some of the strange sort of community that is emerging as a result of the Internet even though it is connecting people across the far reaches of cyberspace.

Posted by Marlin Burkholder at 11:50 PM