Confessions of a Procrastinating Luddite 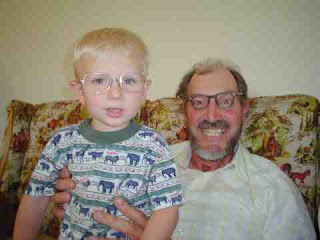 Who ever wanders onto this blog today probably has already noticed that the past two posts which were also posted on January 2, 2007 are a bit late in being posted as they are about events pertaining to the middle of the summer. That is because (You guessed it!) I do not make new years resolutions about overcoming my habit of procrastinating. How could I? I always put off until later the act of making the resolution, assuring that I am going to miss getting it done on the first day of the year sooo – What’s the point? Now if I could just get into the habit of procrastinating procrastinating – hmm! Well – back to my main point. One of the reasons why I have waited this long to get those two summer stories posted is that I actually did attempt to post the story "More Than Vegetables" two times at the proper time and failed. Both times something went wrong with the way I had set it up or the picture program crashed and because somehow I had missed something essential I had to do to save the draft, I lost it when I hit the “publish post” button and it didn’t publish.

So this brings me to the second point of this post. I reveal the fact that I am a genuine, honest to gosh, died in the wool, bona fide luddite when it comes to doing anything with most technological gadgets which have been invented in the past 20 years in general, and with virtually all techy gadgets that have been invented in the past 5 – 10 years in particular. I get along fine with things like shovels, hoes, and crowbars which are usually sure to work if I am sure to work. And anything I can’t fix with baler string or duct tape pretty much loses me. I proved my klutzy incapabilities nearly 40 years ago when I barely passed a high school typing class with a max of 30 words per minute and a minimum of 3 typos in the same time frame. I can assure you that I am no better today on a computer keyboard! Soon after I graduated from high school I quickly reverted back to the old slow but sufficient LPC keyboarding method – Look, Peck, Cuss. This gives me a good excuse for putting off my blogging until winter when I am more likely to have more time. I’m not only slow but I am usually sure to screw up somewhere every time I sit down at a computer. When I blew it two times in a row trying to post the "More Than Vegetables" story, I made one resolution – never again try to write something for the blog without writing and saving it first in MS Word. So this evening I spent well over an hour just copying and pasting two stories I had dutifully written up in “Word” into my blogger. I must have typed that d_ _ _ _ _ user name and password two dozen times before I got them published!

Why do I go to all this trouble to have a blog in the first place? The primary reason is that I feel that I have a story to tell that some one somewhere wants or needs to hear. Several times in the years since I started Glen Eco Farm I have been approached by persons wanting to do a newspaper or magazine write up about my activities and the story about my getting into market farming. Several times I have made presentations at sustainable ag conferences and church gatherings. I did not seek them out because I wanted attention and publicity. They sought me out because they were interested in what I was doing. I readily admit that my farm management style could stand a lot of improvement, so the fact that there are people out there wanting to write or read about my farm cannot be based on the fact that they are impressed with the quality of my work. It has to be that they are interested simply because there is a real need in our world for real food, for a cleaner and more natural world, and for people willing to strive to make it all happen. I did not have people seeking me out for speaking or writing when I was a commercial dairy farmer and neither do I know of anyone wanting to tour commercial poultry or hog farms or wanting to write stories about them. On the contrary I have been hearing more from the general public that they would like to be rid of this kind of farm. Unfortunately many of these same people seem to want their Wal Mart and Target stores. This all tells me something.

Posted by Marlin Burkholder at 3:31 AM

Email ThisBlogThis!Share to TwitterShare to FacebookShare to Pinterest
Labels: My Occasional Rants