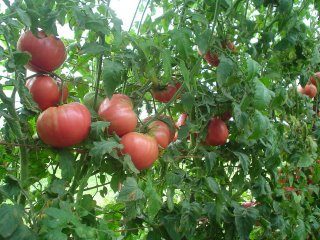 I picked my first ripe Blosser tomatoes around June 20 to the 22nd. On Saturday the 15th I had taken a watch to the dear lady who runs the jewelry store directly in front of my farmers' market stand to have the battery replaced. I couldn't get her to charge me for it. "Just bring me your first ripe tomato!" she insisted. So during the following week I picked around a half dozen of which we savored about three of them. Boy were they ever good! They were all sort of on the small side so I saved three of the nicer ones to take to the jewelry lady on my next market day on the 24th. Your should have seen her eyes when I handed them to her! "Why you weren't kidding were you!" she gushed. "I only wanted one. Give me your watch and I will put a nice new band on it for you!" Then she paraded up and down the line of venders holding them up for all to see, as proud as a 12 year old boy with a brand new fishing rod. You know I love those kind of deals.

The next Saturday, July 1, I had nearly a bread delivery tray full of them at the market and they were all snatched up in about a half hour priced at $3.00 per pound.
That added up to over $75 for the tray nearly full. So I came pretty close to my target date of June 20th for the first tomatoes to sell. It's this kind of fun that makes up for the days when you're sitting there at 12 noon on a hot day and there is still nearly a table full of unsold produce and you are racking your brain trying to figure out how to get rid of it over the weekend. Our church folks are usually the beneficiaries of these scenarios. And the chickens always eat exceedingly well come the month of August.

Remember the story about the renegade chicken I wrote about several weeks ago, the one that got my first ripening tomato around June 7th? The next day she was back up there around 9:00 and I took a crack at her with the 22 rifle and apparently missed though I think I saw feathers fly. She fled back to the pen and I didn't see her again for at least three weeks. I wondered if I might have hit her and she ran off and died somewhere, but I never found a carcass. I was a bit disappointed because I really was looking forward to some chicken potpie that evening.

Well guess what, she made the sojourn once again last Friday morning. I wasn't about to allow her another chance to sample the dozen or so of those half ripe love apples still left on the vines and I got her with one shot. Yay! I had no sooner than put the gun away and gone back out to the garage, to find three cats up on the table where I had spread out my tomatoes to finish ripening, having, you guessed it, a tomato tasting! The rouges scattered before I could start cussing! I immediately stormed back into the house and announced to my wife that I was going to start exterminating cats. I would've done it too if I hadn't have had at least five "gotta do it right now" jobs pushing at me, including butchering a chicken. Oh well, the chicken and corn soup tasted pretty good that evening. Such is the way of life on a farm.

Posted by Marlin Burkholder at 7:36 PM