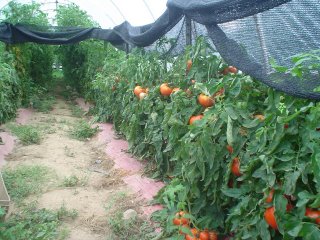 Saturday the 15th I transplanted the first tomatoes to the hoop house closest to the house with hopes that I will be picking the bright pink orbs by the middle of June. These are not an early variety that can be expected to produce a golf ball sized red but not particularly tasty tomato about 60 days after planting out a six week old transplant. No, these are an heirloom variety called "Blosser" that normally needs 80 to 90 days after transplant which in this area means they will start producing around mid July. These are the tomatoes that many people would almost die for and if they do succeed in getting them without dying, they will think they have indeed died and gone to heaven when they cut a slice big enough to cover a slice of fresh home made bread and begin chomping into it. I started these babies in mid January in 24 cell insert trays,(double the root ball space of tomato plants sold in most commercial greenhouses). When the plants are about 4-5 inches tall I double dirt them (pile additional potting soil on top of the flats around and between the plants),nearly doubling again the root ball space. This gives me a 10-12 week old transplant with blooms on it and a root ball the size of my fist (I have a big fist)ready to hit the ground a running. By planting them into a hoop house or high tunnel they get the additional advantage of warmer night time temperatures during the weeks of May and early June. Tomatoes need night time temperatures in the 50s in order to successfully set fruit. So it is realistic to get those salubrious Blosser tomatoes before the end of June if they are planted in a hoop house instead of out in the open.

I finished putting the plastic on the field high tunnels today with plans to get plants in them before this week is out. This is about two weeks earlier than I normally plant tomatoes outside. The picture shows a view inside one of the high tunnels last year showing both Red Suns in the foreground (a hybrid determinate variety) and the indeterminate Brandywines in the background. Near this spot I knelt one time and picked a bushel within arms reach without getting off my knees off of four or five plants.

Posted by Marlin Burkholder at 11:21 PM

Email ThisBlogThis!Share to TwitterShare to FacebookShare to Pinterest
Labels: How we do things