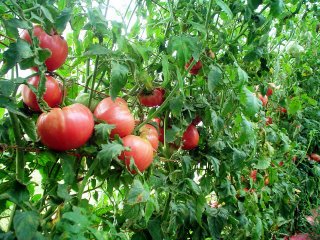 Friday evening we had a night time thunderstorm with spectacular fireworks-a fitting event for Good Friday. The dogs barked and banged on the front door till we let them in and the one cowered under the computer desk until the thunder stopped. Of course I had to drag him outside for awhile to sit on the front porch, watch the show, and commune with the forces of nature. I went to market the next morning with fresh eggs, spinach in prime condition, and because I have been determined to have lettuce to sell by mid April, some cutting lettuce from the field hoop house. I visited my mom in the nursing home for awhile after leaving the market and got home around mid afternoon. I then decided to transplant tomatoes into the hoop house close to the house, the one I showed in an earlier post with mid winter salad greens.

Most intrepid tomato gardeners can pot up an early tomato variety like "Early Girl", "Early Cascade", or "Quik Pic" and have ripe golf ball sized tomatoes, with a flavor that is nothing special, before the end of June.

The plants I was planting are a local heirloom called "Blosser" started from seed in late January and transferred as seedlings into 24 cell flats in early February. In mid March, about the time I normally seed my main tomato crop, I "double dirted" the then four inch tall plants by piling more potting soil on top of the flats. This gave me sturdy ten week old one foot tall plants with root balls the size of my fist (I have a big fist)with blooms on them. Blosser tomatoes normally need 80-90 days beyond a 6-8 week transplant in order to mature fruit. With a little of my neighbors horse manure in the planting holes, some tender loving care, and God's blessings, I can hope to have nice big ripe pink tomatoes by mid June. I can maintain warmer temperatures inside the hoop house for the next two months as tomatoes need night time temperatures no lower than 50 degrees in order to successfully set fruit.

These are not the so so golf ball sized pale red orbs that some early tomato fanatics like to brag about. These are big enough for a slice to cover a slice of fresh home made bread and have a flavor some people would almost kill for. If they do have the fortune to get one without killing, then when they eat it they may think they have died and gone to heaven. The picture shows some Blosser tomatoes I grew last year in a hoop house. They started producing around the first of July, about two weeks earlier than they would have in the open field
Posted by Marlin Burkholder at 6:54 PM

Email ThisBlogThis!Share to TwitterShare to FacebookShare to Pinterest
Labels: How we do things